In this exhibition curated by Taiyana Pimentel, a parallel is established between the post-conceptual practices and the immersion in the historical construction for which García Torres has been known, with the beginnings of his aesthetic strategies in the cities of Monterrey and Mexico; It is analyzed through early works, the connotations of the sense of space and landscape born early in the city that welcomed him in his formative days and which are concepts that have accompanied him in his later artistic practice. Based on this premise, works such as the painting Cerro de la Silla, 1998 and the video Open Letter to Dr. Atl, 2005, made in Guadalajara, can be appreciated.

The Poetics of Return proposes a selection of works that have mostly been presented in international venues but which will be the first time they will be exhibited in the city such as: Merz, Rzemmmm Zeeeeerm Emrzzzzz (At Fibonacci Pace), s / f, The Schilieren Plot, 2013, La Fiesta fue yesterday (a fragmented narrative on the brief history of the Dynamic Museum), s / f, Unspoken Dailies, 2003-2009, Tetela, 2015 and Silence's Wearing Thin Here Mario García, s / f, among other.

This exhibition is possible thanks to the support of:

MARCO appreciates the support of:

Activities related to the exhibition

VIRTUAL TOUR
THE POETICS OF RETURN 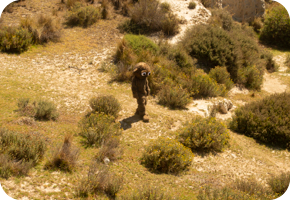 Tour the extraordinary facilities of the Museum's most recent expo and have the experience of visiting MARCO from anywhere.

GUIDED VISIT
The poetic of the return 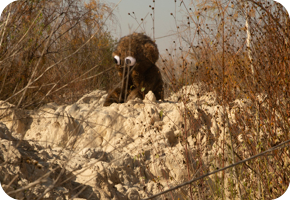 Join us to enjoy the Miguel Calderón exhibition from the comfort of your home. We will review the work that makes up Materi Estética Available, a sample present at MARCO. 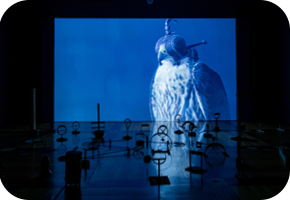 APPLY FOR YOUR SCHOLARSHIP

In these six sessions, a dialogue will be established with special guests in the context of the exhibition Available Aesthetic Material by Miguel Calderón.